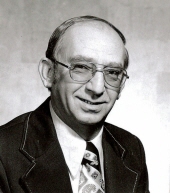 Michael J. Esposito, age 83, beloved husband of Marilyn Karako Esposito of New Haven, passed away peacefully on Sunday, June 18, 2017 at Vitas Hospice in St. Mary’s Hospital, Waterbury. Born in New Haven on December 30, 1933, he was a son of the late Michael J. and Christina Romano Esposito. Mike was a United States Navy Veteran serving in the Korean War. Before his retirement he was a Field Engineer with United Illuminating. Mike enjoyed gardening and going to the casino, but mostly loved spending time with his family and his dog 'Tammy.' In addition to Marilyn, his beloved wife of 54 years, he is survived by his two loving children, Mark Esposito (and his wife Doreen) of East Haven and Michel Gusmano (and her husband Paul, Sr.) of Orange, as well as his four cherished grandchildren, Danielle Esposito, Paul Gusmano, Jr., Michael Esposito and Alessandra Gusmano. He is also survived by his sister, Ann Marie Fuoco of Cheshire as well as many nieces and nephews. He was predeceased by a sister, Emily Bodle and three brothers, Pasqual, Anthony and Alexander Esposito. Friends are invited to meet directly in St. Bernadette’s Church, 385 Townsend Ave., New Haven on Thursday, June 22, 2017 at 10:30 a.m. for a Mass of Christian Burial. Entombment will follow at All Saints Cemetery, North Haven. Family and friends may call on Wednesday from 5:00 to 7:00 p.m. at The Beecher and Bennett Funeral Home, 2300 Whitney Ave., Hamden. In lieu of flowers, memorial contributions may be made to the Shriners Hospital for Children (www.shrinershospitalsforchildren.org).