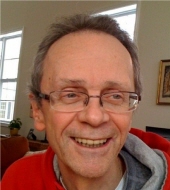 Michael Jay Richards of Prospect, CT died on Friday March 5th after a long and courageous fight against cancer. He was 55 years old. Son of Florence (Lippman) Richards and the late Norman Richards, M.D., Michael was born in Lausanne, Switzerland on September 24, 1954. At the age of two he and his family settled in Waterbury, CT where he attended St. Margaret McTernan and The Taft School. Michael completed his undergraduate education at Franklin and Marshall College in Lancaster, PA and later completed graduate coursework at SUNY Albany, Johnson State College in Johnson, VT and finally Harvard University in Cambridge, MA. While interning at Washington County Mental Health Services in Montpelier, VT, Michael became involved in what turned out to be a lifelong career in human services. He served as the first State Director for The Institute of Professional Practice, Inc., both in New Hampshire and then in Connecticut where he worked until his death. Throughout his career he took a particular interest in the field of negotiating, attending numerous seminars at both Harvard and Quinnipiac Universities. Michael was also a long-time member of the Connecticut Association of Non-Profits, as well as other professional organizations. On April 5, 1986 he married Joanne (Henes) Richards in Montpelier, VT. They made their home and built their family in Waterbury, CT, moving to Woodbury, CT in 1994 and to Prospect, CT in 2009. A devoted husband, doting father and dear friend to so many, Michael is survived by his wife Joanne, children Emily (Emma) and Benjamin, mother Florence Richards, sister Ellen Richards and brother Eric Richards. A Celebration of Michael's life will be held in the Meeting Room of the B'Nai Israel, 444 Main St. North, Southbury, CT, Thursday March 11 at 12 noon. In lieu of flowers, contributions in Michael's memory may be sent to the Harold Leever Regional Cancer Center at 1075 Chase Parkway, Waterbury, CT 06708. Arrangements in care of BEECHER & BENNETT, 2300 Whitney Ave., Hamden, CT.