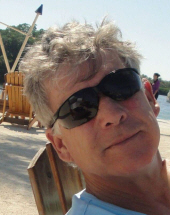 MERIDEN-Michael John Ludemann, 61, of South Meriden passed away suddenly on Monday, May 15, 2017 surrounded by his loving family. He was born in North Carolina to Mildred Helen Ludemann and the late William Charles Ludemann, and graduated from Platt High School in 1973 where he excelled in football through many a losing season. Michael was a skilled craftsman who made his living with a hammer and nails, building houses professionally and fixing one thing or another for everyone he knew. He loved riding his motorcycle, visiting Vegas and Nascar racing. Always a trusted brother and friend, Michael was the first person you called when in need, and the first to show up to fix a broken window and a broken heart. He was both the kindest person you knew and the toughest guy you knew not to cross. He had an unbelievable respect for his parents and cared for them both, full time, for many years. His sibling and their families' were loved and protected by Michael and his passing leaves a hole in everyone's heart. Michael was a dedicated father to daughter Katie, son Michael John (Jennifer), and stepdaughter Amy Jo. He was the proud grandfather of Leon, Kellece, and Caleb, brother to Irene Ludemann, Helen Lange (Alan), Roseanne McMoran (Gary), William (Vera) Ludemann, Bruce (Mary Joy) Ludemann, Thomas Ludemann and Joseph (Holly) Ludemann, as well as uncle to 10 nieces and nephews and their children. Relatives and friends may call at the Beecher & Bennett-Flatow Funeral Home, 48 Cook Ave., Meriden on Thursday, May 18 from 4-8pm. Funeral services will be private.