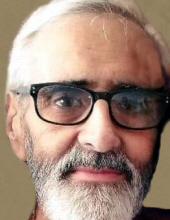 Michael 'Mike' Robert Farquhar, Sr., 69, of Hamden passed away peacefully at his home surrounded by his family on February 29, 2020. He was the husband of Susan Simone Farquhar. Mike was born on November 6, 1950 in New Haven, son of the late Robert and Eleanor Lauria Farquhar. He is survived by his three children, Michael R. Farquhar, Jr. (Tara) of Northford, Valerie Farquhar (Joshua Hetland) of New Haven, and Sherri Farquhar (Chris Golia) of Loris, SC. Mike grew up in West Haven, where he met the love of his life, Sue. They fell in love and were married in 1971. They began their lives together in West Haven and started their family, eventually making their home in Hamden. Mike's interest in automobiles led him to a career as a truck driver for Giering Metal Finishing of Hamden and also for Caretta Trucking of New Jersey, for which he would often drive cross-country. He also worked for Macco Autobody of Hamden, but his proudest work experience came from working with his son for many years at New England Collision, before retiring in 2017. An avid classic car enthusiast with an extensive collection, including a 1971 Chevy Camaro, a 1970 Chevy Nova, and his favorite, a 1959 Chevy Apache truck, Mike and Sue attended many classic car shows together, where they socialized and made many friends from all over Connecticut. While he loved his cars, nothing brought him more joy than spending time with his three grandchildren, Victoria, Dominic, and Camille. Though he was small in stature, Mike made up for it in his personality. He was a prankster to those who knew him best-if given the opportunity, he wouldn't hesitate to play a joke on you. He loved his family tremendously, and wouldn't think twice about lending a hand to anyone, no questions asked. He will be missed by all who knew him. Mike fought hard, but lost his battle to a brief but aggressive illness. His family would like to thank all the healthcare professionals at the Smilow Cancer Hospital for all of the care they provided. Friends are invited to visit with his family on Thursday, March 5th from 4:00 to 7:00 p.m. at BEECHER & BENNETT FUNERAL HOME, 2300 Whitney Avenue, Hamden. Burial will be private.