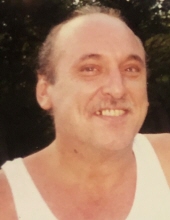 Michael T. Horobin Sr., age 60, of West Haven passed away peacefully at Yale-New Haven Hospital. Michael was a lifelong West Haven resident born to his late parents, Walter Horobin, Sr. and Charlotte (Francis) Horobin. He leaves behind his wife of 35 years, Alison (Battista) Horobin, and is survived by his 2 children, Michael Horobin, Jr. and Lauren Horobin. Michael also leaves behind 2 older brothers; Walter Horobin, Jr. and William Horobin, and a sister, Catherine Horobin-Harder. He was predeceased by his older sister, Charlotte (Chicky) Horobin-Jennings, and a younger brother, Thomas Horobin. He cherished time spent with his best friend and puppy son Brutus. He will be remembered by all who knew and loved him. There will be no calling hours or public services. Arrangements were in care of Beecher & Bennett Funeral Home, 2300 Whitney Ave., Hamden.