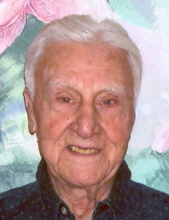 MICHAEL V. SCOOPO, JR. Michael Vincent Scoopo, Jr, 95, of Baldwin Rd., loving husband for 61 years of the late Florence Dechert Scoopo, passed away peacefully at home with his family January 9, 2010. He was born in New Haven Dec. 5, 1914 a son of the late Michael V. and Antoinette Ferrara Scoopo, Sr. and was a long time Hamden resident. He proudly served in the US Navy during WW II, as a 2nd class machinist mate on an LST in the Pacific. Mr. Scoopo was employed during his earlier years at the A.C. Gilbert Co., and later he was a delivery driver for the Railway Express Co. for many years before retirement. He was an active parishioner and former usher at Blessed Sacrament Church, and he spent many hours volunteering at the Clelian Center, the Arden House, and the Regional VNA. Michael is survived by his two daughters, Marilynn Sanzone Aquila of Hamden, Nancy Humiston and her husband Bruce of Cheshire, two grandchildren, Anthony Sanzone and his wife Tracy of Palm Coast, FL., and Elizabeth Sanzone and her fiancee Rick Garcia of Boynton Beach, FL. He is also survived by many nieces, nephews and friends. Mr. Scoopo was predeceased by 4 sisters, Julia Prete, Caroline Teasdale, Mary Sullo, Margaret Scoopo, and 4 brothers Dominic, Peter, Thomas and Salvatore Scoopo. Funeral from BEECHER & BENNETT 2300 WHITNEY AVE. HAMDEN Wednesday morning at 9:30. Mass of Christian Burial will be Celebrated in Blessed Sacrament Church at 10 am. Friends may visit with his family Tuesday from 4-7pm. Interment with Naval Military Honors in All Saints Cemetery. Memorial contributions may be sent to The CT Hospice, 110 Barnes Rd. P.O. Box 90 Wallingford, CT 06492 or to the Clelian Adult Day Care Center 261 Benham St. Hamden, CT 06514.