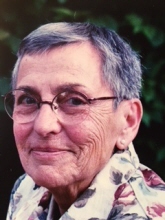 Mildred Isabel Kraemer Greimann, daughter of Mary Eisenschmidt & William Kraemer, died on Tuesday, January 16, 2018 in North Branford, Connecticut. Born on June 25th, 1926, she was the youngest of seven children who lived with her parents and siblings on Winthrop Avenue in New Haven. She loved roller skating, eating pizza at Pepe’s Pizza and fried clams at Jimmies of Savin Rock, and singing in her Walther League Lutheran Church group quartet. An active member of Zion Lutheran Church on Davenport Ave. in New Haven, Millie met Stanley Virgil Greimann, a Yale student from Minnesota, when he showed up at church. Having fallen in love with her wit and creative energy, Stan proposed, and they were married on the Yale campus in 1952. Following Stan's graduation, the Army stationed him at a base in Virginia, to which the couple relocated, and within a few years Millie gave birth to her first child in 1955. Upon Stan’s discharge from the Army they moved back to New England and settled in Guilford, Connecticut to raise their three children, Garth Hunter, Amy Elizabeth, and Eric Rendall. Millie made 'the Arts' central in her family and community, not only inviting neighborhood kids to draw with artist Hunter Mallory in her home on Lovers Lane, but also hauling kids every week to the Saturday Morning Musical School held at the home of violinist Broadus Earle. She also taught creative dramatics in the local elementary school, Calvin Leete, and co-directed the Pickle Players, a children's drama troupe, with Katrina VanTassel Wuerth with whom she wrote a book entitled Creative Dramatization, published by MacMillan. In her spare time, she enjoyed gardening, taking art classes, and regularly meeting with the members of Sew & Go - a neighborhood ladies social group that she helped establish. In her later years she volunteered to rock babies in the Neonatal Intensive Care Unit at Yale-New Haven Hospital, an experience that she cherished for the rest of her life. A resident of Evergreen Woods in North Branford for the last ten years of her life, Millie delighted people with her personable nature, sincerity, wit and off-the-cuff remarks. Her dramatic flair, concern for others, and intense love of family was never extinguished despite her battle with dementia. She is survived by her three children: Garth (and wife Lindsay), and Eric, both of Cambridge, MA; and Amy Carlson (and husband Reed) of Leavenworth, WA. She is also survived by her three grandchildren: Mallory McManus (and husband Jamie) of Winchester, England; Hannah Nash (and husband David) of Hingham, MA; and Reid (and wife Christine) of Denver, Colorado; and her three great-grandchildren: Zoe McManus, and Hunter and William Nash. A memorial service will be held at Tabor Lutheran Church, 45 Tabor Drive, Branford, CT on her birthday, June 25th, 2018, at 3:00 p.m. with a strawberry shortcake social to follow. Please join the family in celebrating Millie's full and rich life. In lieu of flowers, donations can be made in her honor to Edgerton Park Conservancy (https://www.edgertonpark.org) and Yale-New Haven Hospital Neonatal Intensive Care Unit (https://www.givetoynhh.org/give-in-honor).