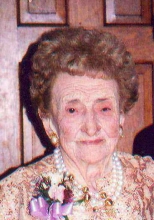 MERIDEN - Mildred Krick Zigmont, 102, of 165 Centennial Ave., died Monday, Nov. 28, 2005 at MidState Medical Center. She was born in Meriden on March 19, 1903, the daughter of the late Jacob and Anna Gamber Krick, and lived here all her life. She was employed at New Departure for twenty-two years, retiring at age 64. One of her great interests in life was music. She played piano and organ at civic groups, organizations, clubs, parties and social functions. She was a member of All Saints Episcopal Church. Mildred is survived by her beloved son, Robert Zigmont of Jeffrey Lane in Meriden; three loving granddaughters, Lee Ann Schlatter and her husband, Todd of Trumbull, Mary Jane Waddington and her husband, Blair of South Glastonbury and Donna Mikolaitis and her husband, Edward of Glastonbury; eight great-grandchildren, Richmond, Robert and Jenna Schlatter of Trumbull, Kevin, Kylie and Kristen Waddington of South Glastonbury and Jayna and Juliann Mikolaitis of Glastonbury; a sister-in-law, Catherine Krick of Agawam, Massachusetts; two nieces of whom she was fond, Karen Krick of Yalesville and Judith Krick Potter of Massachusetts and two caring nephews, Donald Krick of Meriden and William Krick of Deep River. She was predeceased by a sister and brother-in-law, Adeline and William Lynes, with whom she lived for many years and loved dearly; two brothers, Robert Krick and Kenneth Krick and his wife, Maedred; and her beloved daughter-in-law, Jane Riccio Zigmont. She was also very fond of Whitney, the Waddington's much loved Westie terrier. Funeral service Friday, Dec. 2, 2005 at 11 a.m. at BEECHER & BENNETT FLATOW FUNERAL HOME, 48 Cook Ave., Meriden. Friends may call from 9 - 11 a.m. prior to the service. The Rev. Robert Stocksdale will officiate. Burial will be in Walnut Grove Cemetery.