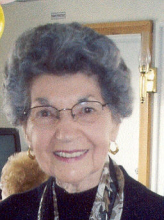 Wallingford- Mildred Ryan Patrick, 92 of Wallingford and Singer Island, FL, formerly of Orange, died at Ashlar Village, on Friday, August 13, 2010. She was born on October 15, 1917 in Hamden to the late Mildred A.Ryan(Vadney) and Charles V. Ryan. She graduated from Hillhouse High School and worked at the Yale Observatory prior to serving in the Woman's Army Air Corps. during WWII. After the war, Mildred married Harrie C. Patrick, Jr. and settled in Orange. She worked for several local businesses, was the secretary to the Academic Dean at Albertus Magnus College for many years and retired in 1982 as President of R.G.Vadney Fuels in Orange. Mildred was a communicant of Holy Infant Church; a member of the Orange Women's Club; the Orange Republican Women's Club; Soroptimists International Inc.; served on the Orange Scholarship committee; and was a member of the Orange Historial Society. Mildred is survived by her sons Harrie C. (Hal) Patrick, III (Fran) of Delmar, NY, Roger C.Patrick of Derby; daughter Marcia R. Patrick of Tacoma, WA; grandsons Eric (Gloria) of Waltham, MA and Andrew (Nalini) of Norwalk, CT, and four great-granddaughters; Sophia, Phoebe, Thalia and Kiera. She was also predeceased by her step-father, Raymond G. Vadney. A Mass of Christian burial will be celebrated on Friday, August 20, 2010 at 10:00 am Holy Infant Church, 450 Racebrook Rd, Orange, CT. Burial will be private. In lieu of flowers memorial contributions in Mildred's memory may be made to the Orange Scholarship Fund, P.O.Box 729, Orange, Ct 06477 or MasoniCare Home Health & Hospice, 33 North Plains Rd., Wallingford, CT 06492.. The Beecher & Bennett Funeral Home, 2300 Whitney Ave., Hamden is in charge of the arrangements.