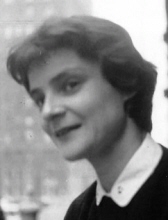 MIMI OBSTLER died peacefully surrounded by her family at age 88 after a long illness. She is survived by her loving husband, Harold, her sons, Peter and Andrew, her daughters-in-law Ellen and Samantha, her granddaughters, Dylan and Sidney, and her grandsons, Aidan and Oliver. Mimi was born on June 12, 1929 in New York City, and was raised there, in Norwalk, CT, and in Los Angeles, California. She attended Connecticut College for Women, where she was a Winthrop Scholar and elected to Phi Beta Kappa in her junior year. Following her undergraduate work, she was admitted to Yale Law School, from which she graduated in 1953. While in law school, she met and married her husband Harold, a marriage that lasted 65 years. After law school, she returned to New York City, where she practiced copyright law for approximately five years, then retired to raise her family. In 1965 she commenced a second career as a studio potter, and became an expert in glaze chemistry. She taught at several institutions and settlement houses in New York City, and authored the book entitled 'Out of the Earth and Into the Fire,' which remains a leading work on glazes and glaze chemistry used by potters to this day. In 1990 she and her husband retired to Old Lyme, Connecticut, where they resided until 2013. While in Old Lyme, she worked as an archivist at the Florence Griswold Museum, hiked, sailed, and enjoyed a full and active life. We will remember Mimi for her compassion, her sense of humor, irreverence, wisdom, brilliance, nurturing, culinary and artistic talents, commitment to fairness, respect for all, and for a life well lived. She will always be in our hearts and minds. Her funeral will be private; arrangements are in care of Beecher & Bennett Funeral Home, 2300 Whitney Ave. Hamden.