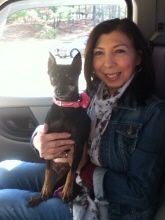 Wallingford- Monica R. Coitrone, 58, wife of William F. Coitrone passed away on Tuesday, October 13, 2015 at home surrounded by her family. She was born March 25, 1957 in Guayaquil, Ecuador, South America; a daughter of the late Manuel and Ruth (Santos) Dominguez. Monica had worked for Canberra Industries, Corometrics and most recently for Power Controls in Wallingford. Monica loved life fully. She was a big fan of cooking Ecuadorian dishes for her family, using some of her own herbs from her garden, being that she had a green thumb. Monica enjoyed being outdoors, mainly with her toes in the sand at the many beaches she and her family traveled. Some of her favorite beaches are in the Caribbean and Ecuadorian coastline. One of the highlights of her traveling was to the Galapagos Islands with her family. Here in Connecticut she loved dining on clams and oysters on a half shell. She always wore a smile on her beautiful face, loved her husband and children fiercely, and was an inspiration to other battling cancer. Her family will always be grateful for her oncologist Dr. Rajani Nadkarni and all the nurses and staff at MidState Cancer Center for their love, care and support . In addition to her husband William she is survived by a son Mark Coitrone and his girlfriend Shannon Hoffer of Wallingford, a granddaughter, Adrianna Lynch, four sisters, three brothers and her dog, Cleopatra. She was predeceased by a daughter, Jennifer Coitrone. Funeral services will be private at the convenience of the family. The Beecher & Bennett-Flatow Funeral Home, 48 Cook Ave., Meriden has been entrusted with the arrangements.