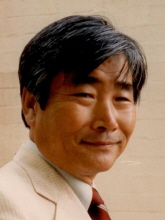 Moo Soo Hwang, age 84, of Branford, passed away peacefully at home with his family by his side on Monday, October 10, 2016. He was born in Daegu, Korea on June 12, 1932 to the late Tae Hyun and Jam Yang Moon. Elder Hwang is survived by his loving wife Tae Hyung Hwang, his sons Haelyung Hwang and Sung-Ho Hwang, his daughter Dr. Jhung Won Vojir, brother Ho Soo Hwang, sisters Soon Ja Moon, Young Ja Armshaw, and Myung Hee Arabolos. He is also survived by 6 grandchildren, and numerous extended family members. He is predeceased by his brother Insoo Hwang. Elder Hwang was a founding member and President of the Korean American Society of CT, and played an instrumental role in the Korean Christian ministry. He was also proud to have founded a church in Kenya. Additionally, Elder Hwang was a Grand Master in Martial Arts, having helped introduce Korean Martial Arts to the state of CT. He truly enjoyed dedicating his life to helping others through many different charities, but above all else he enjoyed spending time with his friends and family who will all deeply miss him. Relatives and friends are invited to visit with Elder Hwang's family on Friday, October 14, 2016 from 5-8pm in the BEECHER & BENNETT FUNERAL HOME, 2300 Whitney Ave. Hamden. A prayer service will be held following the visitation at 8pm. His funeral service will take place in the funeral home on Saturday, October 15 at 10am. Interment to follow in Evergreen Cemetery, New Haven. In lieu of flowers, donations in his name may be made to the Downtown Evening Soup Kitchen, 311 Temple St. New Haven, CT 06511.