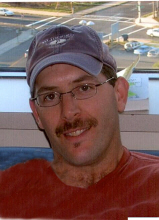 Andrew Louis 'Squiggy' Perrelli, age 44, of Hamden, passed away on June 15, 2013 while surrounded by his loving family. Andrew is survived by his beloved wife Gen (Kaminskas) Perrelli and his two boys that he loved so very much, Lukas and Erich Perrelli. He was born in New Haven on December 28, 1968 a cherished son of Louise Tosetti Borsari & her husband Edward Borsari of Hamden and Ronald Perrelli, Sr. of Florida. He also leaves his siblings, Ronald Perrelli of North Branford, Louise Salvati & her husband Leonard of Wallingford, Edward Borsari of Staten Island, NY, Mark Borsari of Branford and a host of extended family and friends that will forever miss him. Andrew was a finish carpenter by trade. He worked many years at the West Haven Veteran's Hospital with construction and supervision of many of their projects. He continued his career the last several years at Quinnipiac University. He was a member of the Hamden Fish & Game Club, the Foothills Sportsman's Inc. and a life member of the NRA. He was a friend to all as he enjoyed his fishing & hunting. He was a proud fan of the NY Jets and of Nascar Racing, #24. His funeral will be held Wednesday, June 19th at 8:30 AM from BEECHER & BENNETT FUNERAL HOME, 2300 Whitney Ave, Hamden followed by his Mass of Christian Burial at 9:00 AM in St. Rita Church, Whitney Ave, Hamden. Friends may also visit with his family at the funeral home on Tuesday from 4:00 to 8:00 PM. Interment will take place in Centerville Cemetery, Hamden. In Andrew's memory in lieu of flowers donations may be made to 'The Lukas & Erich Perrelli Education Trust Fund' and mailed to the family in care of Beecher & Bennett, P.O. Box 185175, Hamden, CT 06518.