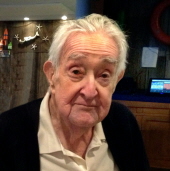 John Andrew Curran Sr. of Hamden CT passed away peacefully in his home on Tuesday, February 11, 2014 at the age of 91. He will be greatly missed by family and friends. Born in New Haven CT on June 20, 1922, he was a son of Joseph Curran and Mary Costello Curran. He grew up in the Newhallville neighborhood of New Haven and attended Hillhouse High School and the University of Connecticut. During World War II he enlisted in the U. S. Army Air Corps as an instruments man and while stationed in San Antonio he met his beloved wife Belia Gutierrez Medina of San Antonio, TX. Employed by the US Postal Service for over 35 years, he retired as the supervisor of the Whitneyville Branch in Hamden CT. In his retirement he was a volunteer to the elderly, assisting in daily tasks such as transportation and shopping. He also volunteered as a tax preparer in Florida during the winter season. Not afraid to tackle new technologies in his mid eighties, he could often be found in the computer lab at the Hamden Miller Library. An ever resilient and flexible mind, he was a great conversationalist who loved his daily crossword puzzles and was always ready to send a note of thanks and acknowledgment to those around him. He was a communicant of Our Lady of Mount Carmel Church and a member of the Newhallville Shelton Ends Association, as well as the Hamden American Legion Post 88 and AMVETS where he was a financial officer. He was predeceased by his wife Belia Medina; his son Joseph and three brothers, Thomas, Joseph and Vincent Curran. He is survived by his two children and their spouses: John A. Curran Jr. and his wife Rosanne Curran, a daughter, Olivia Curran Martson and her husband Sven Martson; two grandchildren, Ryan Curran and Gina Durso and two great grandchildren Marc Vanschaick, Jr. and Talia Durso. Funeral from BEECHER & BENNETT FUNERAL HOME, 2300 Whitney Ave, Hamden on Friday, Feb. 21 at 10:30 AM followed by his Mass of Christian Burial at 11:00 AM in Our Lady of Mt. Carmel Church. Friends may also visit with his family at the funeral home on Thursday, Feb. 20th from 5:00 to 8:00 PM. Interment will take place in St. Mary's Cemetery, Hamden. Contributions in his memory may be made to Our Lady of Mt. Carmel Church, 2819 Whitney Ave, Hamden, CT 06518 or to Miller Public Library, 2901 Dixwell Ave, Hamden, CT 06518.