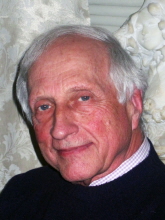 Marvin 'Mark' H. Morgaridge, 82, a resident of East Haven, Connecticut, passed away May 13, 2013. He was born February 1, 1931 in Lincoln, Nebraska the son of the late Harry N. Morgaridge and Lula Wehling Morgaridge and was raised in Havelock and later Lincoln, Nebraska. He proudly served in the U S Navy Reserve in Lincoln and was honorably discharged. Marvin graduated in 1959 with a degree in Architecture from the University of Nebraska-Lincoln. Marvin came east to the City of New York seeking work and settled in Hamden, Connecticut. Marvin worked at some of the world's premier New Haven, Connecticut area architecture/design firms including Eero Saarinen Associates, Roche-Dinkeloo, Kevin Roche Associates and, most notably, Warren Platner Associates. While employed with Eero Saarinen, Roche-Dinkeloo and Kevin Roche Associates, he worked on projects that included the Ford Foundation headquarters in New York City, the Knights of Columbus headquarters in New Haven and additions to Saarinen's, TWA Terminal at JFK airport in New York. With more than twenty years at Warren Platner Associates, Marvin contributed to the design of many of the firm's most significant projects such as the Windows on the World Restaurant and Observation Deck at the top of the World Trade Center, 21 Club in New York City, the Sea Containers House, World Headquarters in London England, the Standard Brands Research Center in Wilton, Connecticut, the MGIC headquarters in Milwaukee, Wisconsin and the Yale Club in New York City. He also represented these firms working on projects overseas. He was a consummate architectural draftsman who produced meticulous construction drawings in an old world way, replete with his exquisite hand lettering. Many of the projects that Marvin provided design development and production drawings for are documented as significant examples and contributions to society's understanding of modern architecture. Marvin never married but he had a long relationship with his very dear friend Mary Ward Curtin who died in 2006. Marvin was a kind and generous person who had a profound respect for family and friends and valued the relationships he developed over his lifetime. Marvin was an avid fan of University of Nebraska football, attended Huskers bowl games across the country and enjoyed watching games with his alumni friends here in Connecticut. He also loved the opera and ballet. He was a member of the Choir at St Joseph's Parish in New Haven. Friends may attend his funeral on Friday at 9:00 AM from BEECHER & BENNETT FUNERAL HOME, 2300 Whitney Ave, Hamden, CT followed by his Mass at 10:00 AM in St. Joseph Church, 129 Edwards St, New Haven. Calling hours will be Thursday from 5:00 to 8:00 PM at the funeral home. Entombment will be in Lincoln Memorial Park, Lincoln, Nebraska at a future date. In lieu of flowers a memorial donation could be made to a charity of your own choice. To send a condolence please see: www.beecherandbennett.com