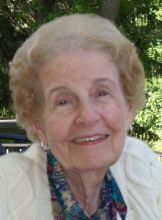 Catherine Gallagher Morse, 90, of Hamden, beloved wife, mother, grandmother, sister, aunt and friend, passed away on June 30th, 2013 in the Hospital of St. Raphael. Catherine was the widow of Hugh Morse. She was born in New Haven on August 25, 1922, daughter of the late John & Susan McDermott Gallagher. Catherine is survived by her daughter, Judith A. Morse of Madison, WI; her sons, David H. Morse & his wife Beverly of Wallingford and Richard A. Morse & his husband Norman Jones of Orange; grandchildren, Katelynn E. Morse, Kerri W. Hilton & Connor D. Morse & her brothers, John J. Gallagher of Stratford & Thomas P. Gallagher of Jamestown, NC. She was predeceased by her son Robert S. Morse. She attended St. Francis Catholic School in New Haven and was valedictorian, and graduated from West Haven High School. She graduated with a Bachelors in Education from New Haven State Teachers College and went on to teach 1st grade in the West Haven School System and later was a substitute teacher in the Hamden School System. Catherine was a bookkeeper for the New Haven Teachers Federal Credit Union, worked in the Finance Department at St. Raphael Hospital and later volunteered over 17 years there. Catherine was active in the Woman's Guild and taught Religious Education at Ascension Church. She also was a long-time volunteer for the CT Cystic Fibrosis Association. Friends may visit with her family at BEECHER & BENNETT FUNERAL HOME, 2300 Whitney Ave, Hamden on Tuesday, July 2, from 8:30 to 9:30 AM and may attend her Mass of Christian Burial at 10:00 AM in Ascension Church, 1040 Dunbar Hill Rd, Hamden. Interment will follow in All Saint's Cemetery, North Haven. Contributions in her memory may be made to the Cystic Fibrosis Foundation, CT Chapter, 101 Centerpoint Dr, Suite 107, Middletown, CT 06457