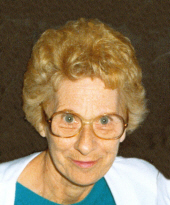 Mrs. Eleanor M. Redding, age 89, of Hamden, Passed away in St. Mary's Hospital, in Waterbury on October 20, 2014. Eleanor was born in Hamden on August 20, 1925, a daughter of the late Adamo and Delcisa Zacchei. Eleanor was predeceased by her husband James William Redding in 1995. She is survived by her son Mark S. Redding and his wife Marcelle of Meriden; her granddaughter Amanda Redding of Meriden and several nieces and nephews. Eleanor was also predeceased by her sister Ida DaCato and her brother David Zacchei. A lifelong resident of Hamden and known to be an avid reader. She retired from Rainbow Cleaners on Whitney Avenue in Hamden where she was employed for many years. Her funeral service will be held on Wednesday, October 22, 2014 at 10:00 AM in Beecher & Bennett Funeral Home, 2300 Whitney Avenue, Hamden and her interment will follow in All Saints Cemetery in North Haven.