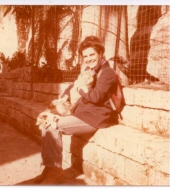 Mrs. Graziella de Solodow, age seventy, of Woodbridge, passed away at her home on March 4, 2014. Born in Cordoba, Argentina on March 30, 1943, she was the daughter of the late Alfredo Patrucco and Sara Puig de Patrucco. With her family she moved to Peru, where she lived until 1965, when she came to the United States. She received her bachelor's degree from Columbia University, with a major in art history; she was especially interested in pre-Columbian art history and archaeology, and had participated in excavations in Peru. She was an artist and teacher of art for many years, with many exhibitions, solo and group, to her credit and many devoted students. She loved nature in all its aspects. She is survived by her husband, Joseph B. Solodow; by her own nephews, Sandro, Sergio, and Pablo, and her niece, Adriana Patrucco de Riva; and by her husband's brother and sister-in-law, Michael and Mikki Solodow, and by their three sons, Damian, Jason, and Andrew. Graziella was predeceased by her brother, Raul Patrucco. She was buried in New York in a private family service. Her memorial service will be held on Thursday, May 1, 2014 at 4:30 PM in the Dwight Hall Chapel on the Yale University Campus. 67 High Street, New Haven, CT. Anyone wishing to honor her memory with a gift might make a donation to the Connecticut Audubon Coastal Center, 1 Milford Point, Milford. Connecticut 06460