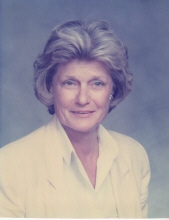 Madison, Connecticut - Jacqueline Mattern Kennedy died Tuesday, March 25, 2014 at the Hearth at Tuxis Pond; she was 90. The daughter of Edmund C. Mattern and Lillian Price Mattern, she was born on September 1, 1923. She grew up in Hamden, Connecticut and graduated from The Gateway School in New Haven, Connecticut, Bradford Jr. College in Haverhill, Massachusetts and Cornell University. At Cornell she joined the sorority Kappa Alpha Theta with her lifelong friend Patricia Fitzgerald Wynne. In 1948 she married her childhood friend and neighbor, Richard Louis Kennedy. Dick and Jackie lived most of their lives in North Haven, Connecticut where they raised three daughters and a son. Much of their social life revolved around the New Haven Country Club where Jackie played golf and bridge and enjoyed pool activities with her children. She was a long time member of the Junior League of Greater New Haven. In 1970, Jackie became one of the first female licensed opticians in the state and joined her husband, Dick in his optical business; Kennedy and Perkins. For many years, Jackie worked in the business both as a fashion consultant and an optical dispenser. In more recent years, Dick and Jackie wintered in Palm Beach Gardens, Florida, where they were members of the PGA National Golf Club. In 2012, upon Dick's death, Jackie moved back to Connecticut to be closer to her children. Jackie was an avid reader and enjoyed reading and discussing books with friends and family. She loved to spend time with her grandchildren and hear about their adventures and accomplishments. She also loved to travel with Dick. She was an animal lover and particularly loved her golden retriever Charlie. She is survived by her children and grandchildren: Janet Messick, her husband, Dart and their children J.D. Messick and his wife Petra and Katie Maddox and her husband Perry; Cindy Hammond, her husband, Art, and their children Meg and Taber and Taber's wife Megan Jean; Jackie Hewett, her husband, Chuck and their children Elizabeth, Sam and Nat and Rick Kennedy, Jr., his wife, Susan, and their children Madeline, Lillian, Isabelle and Jacqueline. Her first great grandchild, Carolina Jane Messick, also survives her. Arrangements are in care of BEECHER & BENNETT, 2300 WHITNEY AVE., HAMDEN. In lieu of flowers, donations can be made to The Connecticut Hospice, 100 Double Beach Road, Branford, Ct. 06405 or the Connecticut Humane Society, 701 Russell Road, Newington, Ct. 06111. A private memorial service will be held at a future date.