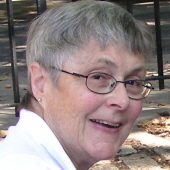 Mildred (Mimi) Machado Neville, of Hamden, CT, died July 16, 2013 at the Whitney Center, after a long struggle with Parkinson's disease. Daughter of Beatrice Gawtry and Jose Antonio Machado, Jr., she was born in New York City in 1935, and grew up there and in Cold Spring Harbor, Long Island. She graduated from the Chapin School and Bryn Mawr College. A registered nurse, with professional degrees from the University of Bridgeport and Yale, she based her career in community mental health in New Haven. She was a lifelong reader, an avid gardener, an early volunteer for Connecticut Hospice, and an alto with the New Haven Chorale. She was married to Richard Gregg Neville from 1960 until his death in 1971, and is survived by their sons Christopher Neville of Brooklyn, NY and Peter Neville of Washington, DC, and four grandchildren. She is also survived by her sister, Louisa Rey, of St. Michael's, MD. Her brother, Jose Antonio Machado, III, died in 1994. Friends and family will gather to remember her at 2:00 pm on Saturday, September 7, 2013 at Whitney Center in Hamden. Memorial contributions can be sent to the National Parkinson Foundation (www.parkinson.org).