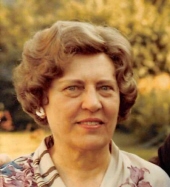 Muriel Newton, 101, of Hamden passed away suddenly, with her family by her side, on Tuesday, January 31, 2017 at the St. Raphael Campus of Yale New Haven Hospital. She was born at home in Brooklyn, New York on January 22, 1916. She was the only child of Capt. Julius and Theresa Buttner. At the age of four, she moved with her family to Camp Pike in Little Rock, Arkansas where her father was stationed. It was at Camp Pike that her father resigned from active duty in the Army. Muriel and her parents then moved to St. Louis, Missouri. Following this, they moved to Worcester, Massachusetts and remained there for five years. When Muriel was ten years old, her family finally settled in Hamden. Coming from a musical family, Muriel began music lessons at the age of five. At the age of seven, she began violin lessons. In high school and college, Muriel played the violin in a classical trio and with a dance band; both groups performed at many New Haven area events. Muriel's first career was in the concert management field as the assistant manager of concerts for Yale University. This included the Woolsey Hall Concert Series, where Muriel had business dealings with many famous musicians. After taking courses in ferrous metallurgy at Yale University, she began her second career at the Research Development and Control Department of the Olin Corporation in New Haven. Muriel was a supervisor in a laboratory experimenting with precision casting by the lost wax method. She was the only woman to have the position of laboratory supervisor at the time. It was at work that Muriel met the love of her life, Walter Newton. They married on February 16, 1949. Muriel and her family enjoyed many trips to Canada and Europe. She was a parishioner of Christ Lutheran Church in Hamden from 1997 until her passing. She loved discussing politics and listening to music every day. Loving mother of Valerie Comeau (Chris Fenner) of Middletown, and Dale (Thom) Zeppieri of Hamden. Beloved grandmother of David Zeppieri. Muriel was predeceased by her husband, Walter T. Newton, and her parents Capt. Julius and Theresa Buttner. Friends may visit with her family on Saturday, Feb. 4th from 10:00 to 11:00 AM at Beecher & Bennett Funeral Home, 2300 Whitney Ave., Hamden, followed by her prayer service to begin at 11:00 AM. Burial will follow in Hamden Plains Cemetery. Contributions in Muriel's memory may be made to Christ Lutheran Church Memorial Fund -Hamden, 600 Shepard Avenue, Hamden, CT 06514