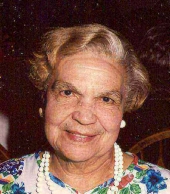 Muriel Mae Carr, 93, of New Haven, passed away Friday, March 23, 2007. She was the wife of the late Frederick Louis Carr. She was born in Jamaica, B.W.I. August 1, 1914 daughter of the late Israel and Ester Gentle Russell. Mrs. Carr retired from S.N.E.T. Co. after 32 years of service. She was a devoted member of the Dixwell Avenue Congregational United Church of Christ and a long standing member of the Dixwell Missionary Board, the S.N.E.T. Pioneers and the Dixwell Senior Center. She was a devoted mother to her daughter Marilyn Butler, son Frederick L. Carr, Jr., and daughter-in-law, Verna. Loving grandmother to James, Jeannine and Phillip Butler, Gail and Lisa Carr. Sister to the late Violet, Ivor, Aubrey and Gerald Russell. She is survived by Herbert, David, Lora and Mary Russell and many nieces and nephews. Funeral service will be held Tuesday, March 27 at 12 noon at the Dixwell Avenue Congregational United Church of Christ, New Haven. Interment will be in Beaverdale Memorial Park. Friends may call at the church Tuesday from 11 to 12. In lieu of flowers, memorial contributions may be made to the Dixwell Aveenue Congregational United Church of Christ, 217 Dixwell Ave., New Haven, CT 06510 Arrangements in care of BEECHER& BENNETT, 2300 Whitney Ave., Hamden.