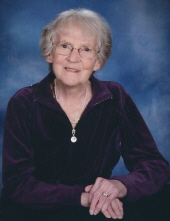 It is with great sadness that the family of Nancy C. Olsen, age 87, beloved wife of the late Harry W. Olsen (1985) announces her passing on April 20, 2020. Born October 17, 1932 in Manchester, CT, Nancy was the daughter of the late Frank & Claribel (Pirie) Carlson. She was a graduate of Manchester High School Class of '51. Nancy met the love of her life, Harry in 1956 while dancing in East Hartford. They were married on October 26, 1957 and they danced until his passing in 1985. Prior to beginning her family, she worked for United Aircraft in East Hartford as an accounts receivable clerk. She took time to raise her family and returned to the workforce as a bookkeeper for 28 years with the American Heart Association in Wallingford. She was a member of First Congregation Church in Meriden and enjoyed many wonderful years as an active member of the choir. Nancy's greatest happiness and joy in life came from being with her family; her unconditional love was always felt. She loved going for car rides with Harry and the girls, was proud to be a Girl Scout leader and Sunday school teacher while her girls were young. Nancy rarely missed the children's and granddaughter's sporting events and could always be counted on as the loudest cheerleader in the crowd. She was a strong, independent and feisty lady with a vast sense of humor and wit. Holidays were made special, from her traditional lamb & bunny cakes at Easter, chocolate cream pie at Thanksgiving, cookies at Christmas and hundreds of pans of her famous pineapple squares that were always a request at picnics and functions. Her goulash was second to none and a true family favorite. Nancy was an avid fan of UCONN women's basketball, New England Patriots, and the Boston Red Sox. She was fortunate to see each of these teams in person and thoroughly enjoyed the outings. When watching the teams play on television it was not uncommon to find her shouting at the television cheering on her favorite teams as if she were there. Nancy also enjoyed gardening, feeding & watching her birds, music & concerts on the greens in various towns, dancing, traveling to Disney, yearly travel to Moosehead Lake Maine for the fly in, theatre and parades. Nancy's smile, infectious laugh, listening ear and gentle words of wisdom will be profoundly missed by all, but especially by her immediate family. She is survived by her three daughters: Deb Olsen of Middletown, Laura (Bryan) Barber of Middletown, Heidi (Tom) Badera of North Carolina; her three granddaughters Heather (Tony) Szymaszek of Meriden, Ashley (Shane) Gaudet, Warwick, R.I., Sarah (Eric) Grundfast of West Des Moines, IA; three great grandchildren, Juleigh Szymaszek, Teeghan & Liam Gaudet. Also leaves her beloved nephew Robert (Linda) Barker of Manchester and many close friends who were more like family; sister-in-law Charlotte Teagle (James) of Cheshire, and brother-in-law Fred Olsen (AZ). She was pre-deceased her parents and a sister Barbara Barker. Nancy's funeral will be private. A celebration of life will be announced at a later date. In lieu of flowers, contributions can be made to the CT Baptist Home, 292 Thorpe Ave., Meriden, CT 06450 or the American Heart Association, 5 Brookside Drive, Wallingford, CT 06492. To share a condolence with her family, please visit www.beecherandbennett.com.