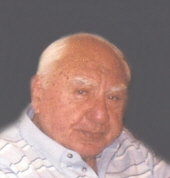 Nazzareno 'Chris' J. Grestini, age 97, of Hamden, passed away on June 18, 2013. He was the husband of the late Mafalda 'Mae' Ferrara Grestini. Nazzareno was born in New Haven on May 3, 1916, a son of the late Dante & Valentina Cornacchini Grestini. He is the loving father of Beverly Maturo & her husband John of Hamden, Valerie Bodie & her husband Kevin of Hamden, John Grestini & his late wife Rosemary of New Haven and Edward Grestini & his wife Lauren of Wallingford. He also is survived by 9 grandchildren, 9 great-grandchildren and several nieces & nephews. Nazzareno was predeceased by his brother David Grestini. Chris worked over 40 years for the United Illuminating Co, retiring as an inspector. Chris was always proud of his Italian heritage; he was a member of the Marchigiana Society of New Haven and the Sons of Italy. Chris was a WWII Army Veteran, a member of the VFW and the American Legion Post # 88. Nazzareno was an avid UCONN Women's Basketball Fan. Chris' family would like to thank the staff of Whitney Manor for their compassionate care he received. Funeral from BEECHER & BENNETT FUNERAL HOME, 2300 Whitney Ave., Hamden on Saturday, June 22, at 9:00 AM, followed by his Mass of Christian Burial to be celebrated at 10:00 AM in the Blessed Sacrament Church, 321 Circular Ave., Friends may also visit with his family on Friday, from 4:00 to 8:00 PM at the funeral home. Burial with Military Honors will take place in St. Lawrence Cemetery, West Haven. Contributions in his memory may be made to St. Raphael Hospital Foundation, 1450 Chapel Street, New Haven, CT 06511.