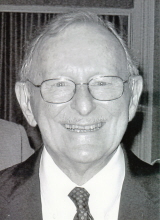 Neil Beckwith, 90, of North Haven, died peacefully on June 22, 2014. Father of Donald S. Beckwith, his wife Debbie, and their daughters, Sarah Pires and husband Mario, of Southington, and their daughter Ava, Rachel Caruso and her husband Scott, of Avon, Abigail Beckwith, of North Haven, Rev. Martha Peck and her husband William Peck, M.D., and their sons, Ethan, of Joshua Tree, CA, and Benjamin, of Brooklyn, NY, Andrew P. Beckwith and his wife Diane, of Wallingford, and their son Daniel. Also survived by his sister Shirley Wilcox, of Wallingford, and Neil's dear companion Sigrid H. Moore, of North Haven. He was predeceased by his wife, Ruth Huff Beckwith, his brothers, Donald G. and Gordon W. Beckwith, formerly of West Haven, and his brother-in-law, Jack Huff, formerly of Gilbertsville, NY. He was an Executive Vice President of the former Second New Haven Bank, President of Amity Bank of Woodbridge, and the organizing President of Founders Bank of New Haven. He was a graduate of West Haven High School, the American Institute of Banking, the School of Banking at Williams College, where he also served as a director, and the Stonier Graduate School of Banking at Rutgers University. He was a member of the Quinnipiack Club, where he served as a Board Member, as well as a term as President, and was an avid duckpin bowler. He was a 55 year member of the Annawon Lodge # 15 A.F. & A.M. in West Haven, and a member of North Haven Congregational Church. He served as a Director on the boards of the following organizations: the former Greater New Haven State Technical College, the City Missionary Society, the North Haven Library, Davenport Village, the CT Society for the Prevention of Blindness, the Literacy Volunteers of Greater New Haven, and Junior Achievement. He also served as a Chairman of the CT Bankers Association Operations Committee, and the North Haven Cemetery Commission. During WWII, he served three years in the U.S. Navy as a Radio Operator on the U.S.S. Fessenden in the Atlantic, Mediterranean, and Pacific Seas. Funeral service will be Thursday morning June 26 at 10 am at BEECHER & BENNETT 2300 WHITNEY AVE. HAMDEN. Friends may visit with his family Wednesday from 4-7 pm. Interment in Beaverdale Memorial Park.