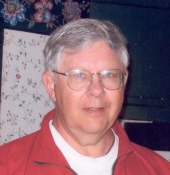 Nelson E. French, 71, of Hamden, was called home on July 9, 2008. He was born in New Haven on January 1, 1937 a son of Bridget Blair Wirkus of Wallingford and the late Nelson W. French. Nelson is survived by his wife of 49 years, Jane Turner French: Sons, Paul B. (Jeannette Darius) of Wallingford, Daniel W. (Lynn Petrosemolo) of Hamden, and Stephen J. (Cheryl Haynam) of Milford and four treasured grandchildren, Erin, Connor, Turner, and Hayden French. Also his sister, Patricia F. Hansen (Ronald) of Cheshire and a brother Bernard W. Wirkus (Donna) of Cheshire and several nieces and nephews. Nelson is a Veteran of the U.S. Navy having served from 1955 to 1962. He retired as Senior Vice President of First Constitution Bank after 34 years of service. Was an Assistant Vice President at American National Bank (Hudson United Bank) from 1993 until his retirement in 1999. A long time parishioner of St. Rita Church in Hamden where he served as a Eucharistic Minister, Altar server, Parish Council President, Financial Committee member, and a member of the Safe Landings Ministry. He is a Past President of the Hamden Lion's Club and a longtime member of the American Lung Association. For many years Nelson was active in the Hamden Fathers' Baseball Association, the Hamden Fathers' Umpire's Association, and The Greater New Haven Umpire's Association. Nelson lived a life of integrity with love for his family and his Lord. A Mass of Christian Burial will be on Saturday, July 12th at 10 a.m. at St. Rita Church, Hamden. Friends may visit with the family on Friday evening from 4-8 p.m. at BEECHER & BENNETT, 2300 Whitney Ave., Hamden. Interment will be in St. Mary's Cemetery. Memorial contributions in Nelson's name may be sent to Connecticut Hospice, 100 Double Beach Rd., Branford, CT 06405 OR the Charity of one's choice.