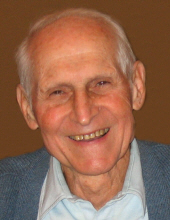 Nicholas Zacharias Kafoglis passed away peacefully in Branford, Connecticut on February 9, 2019. He is predeceased by his beloved wife of 62 years, Patricia Kafoglis, his parents, Kalliope and Zacharias Kafoglis, his step-father, Charles Danos and his brother, Milton Z. Kafoglis. Nick was a native of Lexington, Kentucky, a first generation American and the son of proud Greek immigrants. He graduated from Henry Clay High School, did a postgraduate year at Phillips Andover Academy, and earned his BS from Yale University in 1952. While attending medical school at the University of Pennsylvania in 1953, Nick met Patricia Martin, who was a senior at Beaver College, now Arcadia University. They married and had four children together, with stops at Ohio State and Abilene, Texas, where Nick was a Captain in the US Air Force Medical Corps, before returning to his beloved Kentucky. Nick and Pat settled in Bowling Green, where Nick set up his medical practice, which thrived. In his almost fifty years of practicing medicine, Dr. K was always known as a caring and compassionate doctor who provided care to any who needed it, regardless of their ability to pay. His medical practice was his primary call to service and he felt strongly about providing medical care to all. After he retired from his practice in Bowling Green, he continued to provide medical care as a volunteer to the underserved in Kentucky, in several Caribbean countries, and in Kenya where he served as part of a medical mission team for 5 months in 2003. In 1971, convinced he could make a broader impact on the lives of the members of his community, he ran for and was elected to the Kentucky General Assembly. He fought for working people by sponsoring legislation to repeal the tax on groceries and worked to make the legislature accountable to the citizens of Kentucky. After two terms he stepped down to return to medicine full time. In 1986, he ran for and won the 32nd district seat of the Kentucky State Senate, representing Warren and Logan counties. Senator Kafoglis worked to improve the lives of all Kentuckians by working for broad reforms in education and healthcare. He was proud to collaborate with other legislators from the region and the leadership of Western Kentucky University to strengthen and grow WKU. He was also pleased to work with local and state officials to bring the four lane highway between Bowling Green and Russellville to fruition. Nick was honored in many ways for his service. In 1974, he was voted Outstanding Representative in the Public Interest by the Capitol Press Corp. He was recognized with the William H. Natcher distinguished government service award in 1995, and in 1998 he was ranked the most effective member of the Kentucky Senate. That year he was also named Citizen of the Year by the Logan Leader News Democrat, the only non-Logan county resident to ever receive the recognition. Dr. K was a lifetime member of the WKU alumni association and in recognition of his contributions to WKU and to education for all in the Commonwealth he was awarded an honorary doctorate of letters in 1999. The Bowling Green-Warren County NAACP honored Nick and Pat as the initial recipients of the Nick and Pat Kafoglis Diamond Award. In 2013, the Warren County Democratic Party honored Pat and Nick for their many years of public service to the local community and the state of Kentucky at the annual William H Natcher dinner. Gov. Steve Beshear said of Pat and Nick that 'they truly are two of the greatest citizens of the Commonwealth of Kentucky that you will ever see.' Nick was a devoted member of the First Christian Church (DOC) where he served as an Elder and as Chair of the Board. The First Christian community was extended family for Nick and Pat. Nick loved athletics. He was an ardent WKU and UK fan. He was also proud to be an All-State member of the 1946 undefeated Henry Clay football team and to play varsity football at Yale. He enjoyed tennis and running well into his 80's. He is survived by four children, Ginny Wagner (Chuck), Ellen Kirtley (Ed), Zach Kafoglis (Karen) and Chris Kafoglis (Nancy); and eight grandchildren, Greg Wagner (Jenessa), Lisa Wagner, Eddie Kirtley, Nicholas Kafoglis, Christian Kafoglis, Susannah Kafoglis, Zachary Kafoglis, and Ben Kafoglis. A public memorial service will be held on March 16, 2019 at the First Christian Church, 1106 State St., Bowling Green, KY at 2:00 pm Central Time. In lieu of flowers, contributions may be made to the Patricia and Nicholas Z. Kafoglis Endowed Scholarship Fund held by the College Heights Foundation at Western Kentucky University.