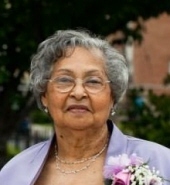 Nieves Mercado 'Meme' Gonzalez, 86, wife of the late Jose Gonzales, died Monday, July 27, 2015 at MidState Medical Center surrounded by her loving family.She was born July 9, 1929, the eldest child of the late Francisco and Emiliana (Burgos) Mercado in Aguada, Puerto Rico.She is survived by her children Nivea Chaparro of Meriden, Jose A. Gonzalez of New Britain, and Alberto Gonzalez and his wife Evelyn of Middletown. She had six grandchildren, Deanna and Amaris Chaparro of Meriden, Ryan and Justin Gonzalez of New Britain, and Kristina and Jilline Gonzalez of Middletown. She adored her two great-grandchildren, Manuel and Vivian Kelleher of Meriden. She is also survived by her siblings Francisco, Edwin, Horacio, and Nelson Mercado and Iraida Martinez and many nieces and nephews. She was predeceased by her son-in-law Angel Luis Chaparro and daughter-in-law Rosa (Cosme) Gonzalez. She was also predeceased by her brothers Anibal, Abelardo, Luis Ariel, and Milton Mercado and a sister, Haydee Ruiz. She settled in Meriden in 1952, where she met her husband and married in 1953. Nieves worked at Bailey Laundry before becoming a housewife. She also sold Avon for a number of years. She enjoyed reading and crocheting and spent a great deal of time at the Meriden Senior Center in her later years. A service for Nieves will be held on Wednesday July 29, 2015 at the Beecher & Bennett -Flatow Funeral Home, 48 Cook Ave. Meriden at 10 a.m. Interment in Walnut Grove Cemetery. Friends may visit with her family on Tuesday July 28 from 4-8 p.m. in the funeral home. In lieu of flowers donations can be made to Franciscan Sisters of the Eucharist, 405 Allen Ave., Meriden, CT 06450 or the Meriden Senior Citizens Center, 22 West Main Street Meriden, CT 06450.