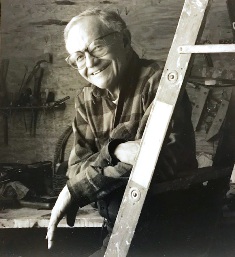 Norman Andrews, 97, died peacefully at home October 12, 2022. A longtime resident of North Haven, Norman resided with his wife of 71 years, Margery (Mag) Andrews.
Norman was born April 17, 1925 to the late Abraham and Isabelle (Slafsky) Andrews, in Somerville, Mass. Norman’s formative years were spent on his family’s chicken farm in Middleboro, Mass. He served in combat in the Army in WWII, where he qualified as a sharpshooter and received an honorable discharge at the rank of sergeant. After obtaining his B.S. in Engineering from MIT, Norman worked in engineering and managerial roles at Raybestos Co., Stratford, Conn.; Hersey Manufacturing, Boston, Mass.; and Griswold Manufacturing Co., Erie, PA. In 1960 he purchased Peck Bindery, West Haven, Conn. He expanded the bindery to locations in Hartford, Conn. and Long Island, NY, retiring in 1987.
After retirement, Norman’s creative energies found expression in repurposing the Peck Bindery building to artists’ studios, together with his daughter Karen. They worked on this together for 10 years as part of the New Haven arts renaissance. He learned woodworking, and particularly enjoyed found art. His home is graced with a menagerie of whimsical sculptures.
Norman brought warmth and curiosity to all his interactions. He traveled widely with his wife and his family, and merrily mangled many languages in his quest for connection. Norman was a master of appreciation: for good food, good company and loving care. He and Margery enjoyed playing tennis and bridge, and were avid ballroom dancers. He was active in an array of volunteer activities, including creating affordable housing.
Norman was predeceased by his parents, his brother Jason Andrews, his sister Ruth Andrews Reny and his son-in-law, Michael Costerisan. In addition to his wife, Margery, he leaves to mourn his loss his daughters Barbara Andrews (Donald Fritz) and Karen Andrews, nephews and nieces and their children, and a loyal circle of friends. The Andrews family extends its gratitude to the attentive caregivers who made it possible for him to remain at home, safe and happy, and to Franciscan Home Care & Hospice Care.
Donations in Norman’s memory may be made to the Conn. Foodshare, Fellowship Place, the New Haven Symphony Orchestra, or Columbus House.
Norman’s funeral service will be held Sunday, Oct. 16, 1:00 PM at Congregation Mishkan Israel (masks required). Burial will be Monday, Oct. 17, 10:00 AM at Beaverdale Memorial Park.