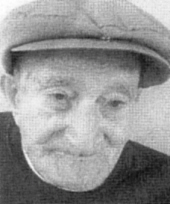 Pasquale S. Borelli, age 107, formerly of Cheshire, passed away on October 28, 2017 at the Skyview Center in Wallingford. Born in New Haven on January 22, 1910, he was a son of the late Joseph & Pasqualina (Fiorello) Borelli. He was predeceased by his wife Ruth (Hardenburgh) Borelli and his brothers, Joseph, Domenick, John, & Andrew Borelli. Pasquale is survived by his daughter, Audrey Buttery of Cheshire; his grandsons, Steven Buttery of Wallingford, Robert Buttery of Cheshire, & Richard Buttery & his wife Patricia of Southington, and his great-grandchildren Robyn & Ethan Buttery, both of Southington. Pasquale was retired from the former Winchester Repeating Arms. He was a D-Day U.S. Army Veteran, a former member of the Hamden Elks Lodge #2224, and the American Legion Highwood Post #150, and an avid golfer. His family would like to thank the Skyview Center for the care and compassion he received there over his last years of his life. Funeral Service will be private. Arrangements are in care of BEECHER & BENNETT FUNERAL HOME, 2300 Whitney Ave., Hamden.