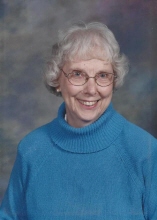 Patricia Ann Merchant, age 90, of Hamden, CT, formerly of Gahanna, Ohio passed away on June 30, 2015 at her residence in Hamden. Born in Coshocton, Ohio on February 12, 1925 she was a daughter of the late William & Zelma Jones Zugschwert. Patricia was the widow of Arthur James Merchant; mother of Bonnie S. Miller & her husband Richard of Hamden and John A. Merchant & his wife Margueret Bernier of Toronto, Canada; grandmother of Jessica Parker and her husband Allehandro Parker, Amanda & Lauren Miller; great- grandmother of Noah, Emma, Caleb, Zoey & Fisher and sister of Virginia Bolen, William & Paul Zugschwert all of Ohio. She has been a resident of Hamden for the last 6 years, moving from Ohio and had lived in Wayne, PA from 1960 until her retirement. Patricia was employed for over 25 years, retiring as Executive Administrator for the Department of World Mission Support - American Baptist Church in the USA. She was a former member of the Kiwanis Club in Gahanna, Ohio. Friends may attend her Funeral Service on Tuesday, July 7th at 10:00 AM in the Trinity Church on the Green, 230 Temple St., New Haven, CT. Burial will take place in Pennsylvania at a later date. Arrangements are in care of Beecher & Bennett Funeral Home, 2300 Whitney Ave, Hamden. In lieu of flowers contributions in her memory may be made to the Alzheimer's Research at Alzheimer Association, P.O. Box 96011, Washington, DC 20090.