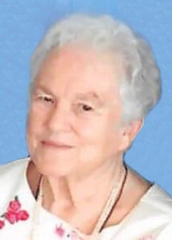 Patricia B. Shultz, 84, of Hamden loving wife of the late Edward C. Shultz passed away November 15, 2021 in Hartford Hospital after a brief illness. She was born in Union City, NJ, a daughter of the late Jack and Florence (Scouris) Branagan, and was a graduate of S.C.S.C., where she obtained her B.S. and Master’s degrees. She was a teacher in the New Haven School System for many years. After retirement, she was active in the New Haven Retired Teachers Association, where she organized many bus trips. Patricia was a member of the Cheshire Methodist Church and was formerly active with the Brownies, Girl Scouts, and Mothers of Twins.
Beloved mother of Kirk (Ellen) Shultz of Stratford, Richard Shultz, Carrie (Russell) Velardi, and Craig (Joanne) Shultz, all of Hamden, Scott (Anne) Shultz of Stratford, and Bruce (Wendy) Shultz of Raynesford, MT. She is also survived by 14 grandchildren, 3 great-grandchildren, and her sister, Susan Branagan of Bridgewater.
Friends may visit with her family on Saturday, November 20th from 2-5 p.m. at BEECHER & BENNETT, 2300 Whitney Ave., Hamden, and are invited to attend her funeral service on Sunday, November 21st at 2 p.m. in the Cheshire United Methodist Church, 205 Academy Rd., Cheshire, CT 06410. Memorial contributions may be sent to the Cheshire United Methodist Church.