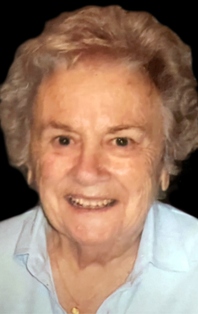 Patricia Hughes Hart passed peacefully on December 10, 2021. Born in Springfield, MA on May 31, 1932, she was married to John Hart for 62 years. John predeceased her in 2014. Pat was a cherished mother, grandmother, and great-grandmother. Originally from Hinsdale, MA, Pat moved to the New Haven area to attend Larson College in Hamden (now Quinnipiac University), graduating as a medical technician. She worked at Yale-New Haven Hospital for many years before working with several doctors in private practices in the New Haven area. After John’s passing, Pat moved back to the site of the original Larson College, but this time as a resident of Atria Larson Assisted Living. She relocated to St. Patrick’s Manor two years ago in Framingham, MA, where she received loving and compassionate care as she battled dementia.
Pat was a lifelong volunteer. She served at the hospital, at church, at SARAH, at CT Hospice, and on the radio reading news to the blind. To us, she was the family photographer, banana cream pie maker, best gift giver, home decorator, antique collector, and family handywoman. What she taught us about family – putting family first, being honest, honoring commitments, having good manners, being the biggest cheerleader and sometimes the harshest critic – will stay with us every day of our lives. Her greatest joy in life was being with her growing family and carrying on their beloved traditions.
Pat leaves behind her daughter and son-in-law, Laurie and Sam Docknevich of Hopkinton, MA; her two sons and their wives, Scott and MaryAnn Hart of Gilford, NH, and Robert and Donna Hart of North Branford; her seven grandchildren, Kate, Eric, Rob, John, Kyle, Michael, and David; and her great-grandchild, Ada, with another on the way in January. She also leaves her sister Robin Foss and her husband Michael, of Georgetown, MA. Funeral services will be private and are being arranged by BEECHER & BENNETT, 2300 Whitney Avenue, Hamden.