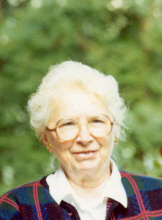 Patricia J. Gordon, 91, wife of the late Edward J. Gordon and Herbert Chermside Pollock, died on July 21, 2010 at Masonic Healthcare Center in Wallingford. Born Patricia Dearborn Jencks in 1919 to the late Ralph and Charlotte L. Jewell Jenks, she traveled with her family as a girl, living in Texas, Indiana and Ohio. After her father's early death in 1931, she moved to Littleton, New Hampshire with her mother, Charlotte L. Jewell Jencks and her sisters Priscilla and Ann. They weathered the depression with grandparents. Patricia left Littleton for a year of study at Northfield School in 1936, and then went on to Smith College, where she received an A.B. in 1941, and the Harvard School of Education, from which she received an M.A.T. degree. After a year of teaching high school in Old Town, ME she married Edward Gordon; a fellow graduate of Harvard. While he taught high school English at several secondary schools, she raised their four children: Ann of New Brunswick, NJ, Peter of Norcross, GA, Sarah of Hamden and David of Philadelphia, PA. She is also survived by three grandchildren; Megan and Julie Gordon, and Daniel Marketti, as well as seven step grandchildren. While living in Philadelphia for 11 years, Pat taught in the Great Books Program and was among those concerned about efforts to exclude African Americans from a Friends School. In Connecticut she taught for several years at the Foote School in New Haven, and later became Principal of the Children's Center School in Hamden. Noting the lack of resources for women at Yale, she helped found the Yale University Women's Organization during the years before women were accepted there for undergraduate degrees. Her household was known for its dinner table discussions in which she referred her children to the World Book at the supper table to find answers to their questions, and read aloud to them after eating. Five years after her first husband died in 1975, Pat married Herbert Chermside Pollock. He brought four additional adult children to the family, James, Martha, Richard and Robert, as well as Moss Ledge, one of the Great Camps of the Adirondacks. Family reunions took place annually at Moss Ledge until Herbert's death in 2000. During their many travels together in Europe and the Middle East, Pat felt especially privileged to attend a Rhodes Scholar reunion at Oxford University with her husband. There she met Queen Elizabeth II and sat at High Table on Gaudy Night. She will be interred at Montowese Cemetery in North Haven, with her first husband. A Memorial Service for Pat will take place on Saturday, October 9th at 2 pm in Bridge House at Ashlar Village in Wallingford. The service is open to the public. BEECHER & BENNETT, 2300 Whitney Ave., Hamden in care of arrangements. Contributions in Pat's memory may be sent to the Southern Poverty Law Center, 400 Washington Ave., Montgomery, AL 36104 or splcenter.org