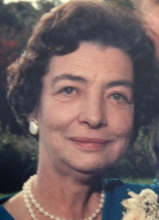 Patricia Joan Martin Kafoglis passed away peacefully in Hamden, Connecticut, on June 28, 2016. Patricia, or 'Pat' as her family and friends knew her, was born in the Bronx, New York on July 2, 1932. She grew up in Bardonia, New York and graduated from Pearl River High School and Beaver College, now Arcadia University. In 1953, Pat met and started dating Nicholas Z. Kafoglis while he was attending medical school at the University of Pennsylvania. The two were married shortly thereafter and had four children together. Pat and Nick then settled in Bowling Green. Pat lived her life dedicated to her family, her church, social justice, women's rights and educational and political causes. Her public life included being a member of the Warren County Democratic Party, Chair of the Bowling Green Human Rights Commission, and member of the Board of Directors of the Kentucky Mental Health Association. Pat also served on the Prichard Committee for Academic Excellence and was appointed to the Kentucky Council on Higher Education in 1984 by then Governor Martha Layne Collins. She was a key player in local Democratic politics for many years and was well known for her skills as a precinct organizer. In 1975, Pat ran for a seat in the Kentucky State House of Representatives, when few women were involved in elected politics. At that time she said, 'In Bowling Green it's rare for a woman to run for office. I know hundreds of women with the ability to serve but won't. If women begin to run for office, women will begin to be elected'. The next year, she served as a delegate to the Democratic National Convention. She campaigned and organized for the Equal Rights Amendment as a member of the Women's Political Caucus, advancing the cause of equality for women and all people. Throughout her life, Pat made significant contributions to ensuring all people were afforded the opportunity to pursue their dreams and live their lives without barriers due to race, gender, or class. In 2009, the Bowling Green-Warren County NAACP honored Pat and Nick as the initial recipients of the Nick and Pat Kafoglis Diamond Award. The award is given annually to a community member(s) who reflect Pat and Nick's leadership, passion for community engagement, and positive outlook for the future. In 2013, the Warren County Democratic Party honored Pat and Nick for their many years of public service to the local community and the state of Kentucky at the annual William H Natcher dinner. Kentucky political figures including Gov. Steve Beshear, former Sen. Wendell Ford and former Gov. Paul Patton and others paid tribute to the couple during the event. Beshear said of Pat and Nick that 'they truly are two of the greatest citizens of the Commonwealth of Kentucky that you will ever see.' Pat was a member of the First Christian Church of Bowling Green for over 50 years, where she served as a deacon and an elder and enjoyed singing in the choir. Her strong but gentle and selfless spirit and dedication to serving others was a blessing to all who knew her. Pat was an avid reader and a leader in the Chautauqua book club. She freely shared her knowledge of and passion for simplicity, nature, birds, wildflowers, and preserving the environment. Pat was an outstanding cook, preparing many memorable meals over the years for family and friends. She will also be remembered for her contributions of food and conversation during the many potluck dinners that she and Nick shared with friends for more than 30 years. Pat is survived by her husband, Nick; her four children, Ginny Wagner (Chuck), Ellen Kirtley (Ed), Zach Kafoglis (Karen) and Chris Kafoglis (Nancy); and her eight grandchildren, Eddie Kirtley, Greg Wagner (Jenessa), Lisa Wagner, Nicholas Kafoglis, Christian Kafoglis, Susannah Kafoglis, Zachary Kafoglis, and Ben Kafoglis. A private service was held in New Haven, Connecticut. A public memorial service will be held in Bowling Green, Kentucky on July 16 at the First Christian Church at 4:00 pm. In lieu of flowers, contributions may be made to the Patricia and Nicholas Z. Kafoglis Endowed Scholarship Fund held by the College Heights Foundation at Western Kentucky University.