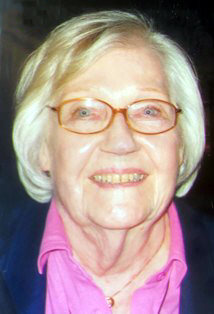 Patricia ‘Pat’ MacKown Bossi, of Meriden, CT, passed away peacefully on July 7, 2021, the loving wife for 72 years of Craig Arthur Bossi, who predeceased her one month earlier.
Pat was born in Kenwood, NY in 1924, the daughter of Leon and Gertrude (Forgue) MacKown, and lived most of her early life in Kenwood and Chicago, IL. She and her parents moved to Meriden in the 1930’s.
Pat attended the University of Connecticut and graduated with a Bachelor of Science degree in 1947. She met her future husband at the university, and they subsequently married in 1949. She felt great connection with her sisters of Kappa Alpha Theta sorority and later was a member of the American Association of University Women
She dedicated many years of her life to giving her three children the freedoms to explore and love the joys of life. She applied that same sensibility while Chair of the Camp Claire Committee of The First Congregational Church of Meriden – where she also served as trustee – to making youth camping more accessible for others to experience the inspiration of nature.
Pat was as a real estate agent for the Squire Agency in Meriden. She served as a director of the Central Connecticut Board of Realtors. She also served her community as past president of the Meriden Junior Women’s Club and officer of the Charity Club of Meriden. She and her family summered for many years at their home in Bremen, ME. Pat was a member of the Wawenock Golf Club in Walpole, ME, where she served as president of the Ladies Golf League.
She is survived by her loving children and their families: daughter Robin A. Moore and husband Paul F. Moore and their daughter Sarah B. Moore and fiancé Eric Chan (to be wed later this month); daughter Kim A. Hertweck and husband Timothy R. Hertweck and their daughter Alison F. Hertweck and son Lucas M. Hertweck and partner Sarah Hackett; and son Craig A. Bossi, Jr.
Pat leaves this world knowing she was loved. Her faith in future pathways is well expressed in her favorite line from a hymn: “I touch the fringes of eternity.”
The family expresses their sincere appreciation for the caregivers, nurses, and physicians at Midstate Medical Center for their professionalism and compassion.
Arrangements are entrusted to the Beecher & Bennett-Flatow Funeral Home, 48 Cook Avenue, Meriden, CT. There are no calling hours. In lieu of flowers, donations may be made in her memory to the Camp Claire Scholarship Fund, c/o First Congregational Church, 62 Colony St., Meriden, CT 06451.