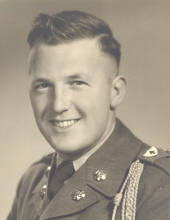 MERIDEN-Paul Douglas Hudson Jr., 92, passed away peacefully surrounded by the love of his family on October 17, 2019. He is predeceased by his parents Paul and Margaret Hudson, his sister Doris Mayo, and his parents-in-law John and Mae Conte. Paul is survived by his loving wife Mary (Marie) who he has been married to for 59 years; and his children Paula Reardon (John) of Saratoga Springs, NY, John Hudson (Susan)of Prospect, and Carolann Hudson of Meriden. In addition, he is survived by his grandchildren who he treasured: John Reardon IV and Aubrey Reardon, Brianna Hudson and Nicholas Hudson, William Watson, Andrew Watson, and Zachary Watson; his favorite cousin Martha 'Sissy' Holland of Suffolk, VA; and many nieces and nephews. Paul was born on January 27, 1927 in Newport News, VA. He was drafted into the United States Army at the age of 17. Paul continued to serve in the army for 22 years, serving in Germany and during the Korean War. He later served as a Master Sergeant in Fort Benning, GA as a weapons instructor for the Ranger Regiment. Upon retirement from the U.S. Army he worked for Colt Firearms in Hartford, he continued employment for 15 years at the Stop & Shop warehouse in North Haven and he worked as a security guard as his retirement job, until he was 75 years old. Paul was an avid Yankees and Patriots fan, sharing his vast sports fact knowledge with his grandchildren and wife while watching games. His passion for sports extended to supporting local sports teams and the UConn Huskies women's basketball team. His hobbies also included going to concerts at the Oakdale Theater with his wife, and reading over 500 books since retirement including the Holy Bible, which he was very proud of. Paul was a huge fan of Frank Sinatra. He loved traveling to visit family members and to be a support to his children and grandchildren during their lives. He loved to play card games and taught each of his grandchildren at a very young age. His family would like to give special thanks to Carolann Hudson and Andrew Watson for their unwavering care during the last year of his life and Susan Hudson and Paul's children in the last few days of his life. Also, to Pastor J.P. Morgan for the spiritual and emotional support. Special appreciation is given to the Hartford Hospital Hospice who worked with the family during his final days. Relatives and friends are invited to visit with Paul's family on Monday, October 21 from 9:00 to 10:15 AM at Beecher & Bennett-Flatow Funeral Home, 48 Cook Ave., Meriden. His funeral service will follow at 11:00 AM at Montowese Baptist Church, North Haven. Burial will be private. In lieu of flowers, memorial donations in Paul's name may be made to The American Parkinson Disease Association, 135 Parkinson Ave., Staten Island, NY 10305, or The Dementia Society of America, PO Box 600, Doylestown, PA 18901 or, Montowese Baptist Church, 201 Quinnipiac Ave., North Haven, CT 06473.