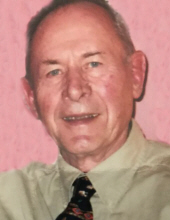 Paul Malcolm Dearborn, age 95, passed away on October 20, 2018 at his residence in Cheshire, CT, with his loving wife and daughter by his side. Born in Melrose, MA on January 10, 1923, he was the son of the late Paul Malcolm Dearborn Sr. & Louise Nowell Dearborn. He graduated from Melrose High School, where he was active in band and orchestra, dramatic events, and played ice hockey. Paul attended Harvard University. A former resident of Stamford for over 50 years, he is survived by his beloved wife of 72 years, Ruth Longfellow Perley Dearborn; his daughter, Patricia Louise 'Patti' Cole of Stamford; his son Paul Malcolm 'Chipper' Dearborn III of Portland, OR; grandchildren Mark Alan Cole, Megan Anne Cole, & Noell Michael 'Tripp' Dearborn; and great-grandsons Joshua, Matthew, & Zachary Cole. In his early years, Paul enjoyed a brief exposure in the 'Big Bands,' playing with Tony Pastore and Rosemary Clooney. Paul continued his major interest with instrumental music throughout his life with his own small band on weekends and for the Stamford Recreation Department in the summer evenings at Scalzi Park, as well as the New Canaan Town Band and most recently with the Cheshire Town Band. He was formerly employed at Reynolds Metal Company for over 20 years, before he joined International Paper Company for 23 years. Friends may attend his Graveside Service on Friday, October 26th at 11:00 AM in Long Ridge Union Cemetery, Erskine Road, Stamford, CT. Contributions in Paul's memory may be made to Simchat Yisrael Messianic Synagogue, 870 1st Ave., West Haven, CT 06516. Arrangements are in care of BEECHER & BENNETT FUNERAL HOME, 2300 Whitney Ave., Hamden.