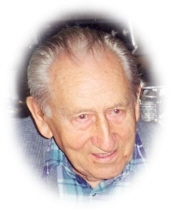 Meriden- Paulis Vikelis, 94 passed away April 13, 2008. He was the husband of the late Margaret (Morosow) Vikelis. Paul was born in Latvia on March 5, 1914. After release from his service in the European region by the Director of the British Occupied Zone in June 1947, Paul secured sponsorship for his move to Westbrook, MN. On his journey from Germany to New Orleans on the USNS 'General Harry Taylor' Paul was given an excellent recommendation by the Executive Officer for his work under adverse conditions. After fulfilling his sponsorship requirements, Paul moved to Meriden and worked as a machinist, retiring from Talcott Machine Products. Paul was an avid gardener, stayed knowledgeable on current events and supported many charities worldwide. He enjoyed his walks and weekly meals at the local Chinese Buffet. He said it was 'good for his digestion'. Memorial gathering will be held at BEECHER & BENNETT-FLATOW FUNERAL HOME, 48 Cook Ave., Meriden on Tuesday, April 22 at 11 a.m. Paul will be laid to rest with his wife in late spring at the Latvian Memorial Park in Tannersville, New York. Contributions in Paul's memory may be made to the American Latvian Association Inc., 400 Hurley Ave., Rockville, MD 20850 or to the Latvian Lutheran Church, 21 Garden St., Manchester, CT 06040. The Beecher & Bennett-Flatow Funeral Home, 48 Cook Ave., Meriden is in charge of the arrangements.