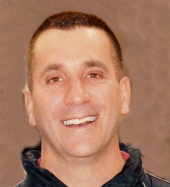 Pell John Palluotto, age 55, of East Haven, husband of 30 years to Virginia Schimelfanick Palluotto, passed away unexpectedly on September 25, 2012. He was born in New Haven, Ct on July 24, 1957 to the late John Pellegrino Palluotto and Gloria Vissicchio Palluotto. Besides his wife, Pell leaves his daughter, Gina Marie Palluotto of East Haven; sisters Jonna Palluotto and (Michael Giamattei) of East Haven, Robyn Palluotto DeLuca and (Frank DeLuca) of Woodbridge, Kristen Palluotto of Meriden, and most beloved Aunt Geraldine Roche. Pell was predeceased by his sister, Dorinda Palluotto, Aunt Francis Mellillo, and Uncle Salvatore Vissicchio. Pell was a resident of Hamden for most of his life. He was the former owner of the Mt. Carmel Barber Shop in Hamden, and was a member of the East Coast Swamp flyers. He was an exceptional Hamden High School hockey player. Pell was a dedicated family man and enjoyed flying his helicopters as well as fishing. Calling hours will be held at BEECHER & BENNETT funeral home on Monday from 5:00 to 8:00 p.m. Friends may attend his funeral on Tuesday at 9:00 a.m. from BEECHER & BENNETT FUNERAL HOME, 2300 Whitney Avenue, Hamden, with his Mass of Christian Burial to be celebrated at 10:00 a.m. at St. Mary's Church, 5 Hillhouse Avenue, New Haven. Burial will follow in St. Mary's Cemetery.