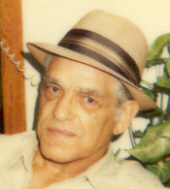 Percy E. Perry, 94, of New Haven passed away Thursday, May 13, 2010 in New Haven. Husband of Willie Mae McClendon Perry, Percy is also survived by daughters Margo A. Perry Walker of Columbia, SC and Charlotte L. Perry Lawrence of West Haven; son Emanuel P. Perry of New Haven; fourteen grandchildren, twenty-two great-grandchildren and two great-great-grandchildren a niece and a host of other relatives and friends. He was predeceased by sons Robert J. Perry and Charles D. Perry, his first wife Vera Irene Fath Perry, sister Elmena Perry and a brother, Ellsworth J. Perry. A son of the late Manuel Lopes and Miron Griffin Perry, Percy was born in New Haven on January 18, 1916. He worked for Mallable Iron Fittings Co. as a molder and then as a salesman for Lou Martins Furniture Store in New Haven for 10 years until his retirement. He was a member of the former Cape Verde Club on Wallace Street in New Haven. Funeral Service Monday, May 17, 2010 at 11 a.m. at BEECHER & BENNETT-TAYLOR FUNERAL HOME, 410 Campbell Ave., West Haven. Friends may visit with the family prior to the service from 10-11 a.m.