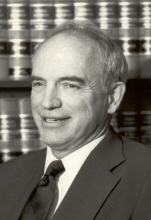 The Honorable Peter Collins Dorsey, of North Haven, Conn., died Jan. 21 at The Connecticut Hospice. He was 80. Peter Collins Dorsey was born March 24, 1931, to Helen and Thomas Dorsey, of New London, Conn. He attended The Harbor School in New London, and Philips Academy in Andover, Mass. In 1953, he earned a Bachelor of Arts from Yale University, and in 1959, he graduated from Harvard University School of Law with his J.D. He served on active duty in the U.S. Navy from 1953 to 1956 and in the U.S. Naval Reserve from 1956 to 1966. He retired as a lieutenant commander. Judge Dorsey is survived by his wife of 58 years, Cornelia M. Dorsey; children Karen (James) Fawcett, Peter (Nancy) Dorsey Jr., Jennifer Dorsey and Christopher Dorsey; grandsons Anson Dorsey and Christopher Dorsey Jr.; sister Joan Heal; brothers-in-law Laurence (Kathy) McEwen and William (Sherry) Marin; and seven nieces and nephews. He was predeceased by his parents; his brother, William Dorsey; and his nephew Jonathan Marin. Judge Dorsey was in the private practice of law from 1959 to 1974 in New Haven, Conn. He served as the United States attorney for the district of Connecticut from 1974 to 1977, when he returned to private practice. In 1983, he was appointed a U.S. district judge. He served on the Judicial Conference of the United States Courts from 1995 to 1998. Judge Dorsey was a member of the American Bar Association (House of Delegates 1975-79) and the Connecticut Bar Association (president 1977-78, Board of Governors 1966-69, Ethics Committee 1960 to 1983 and chairman 1970 to 1973.) Some of the his other memberships included the New Haven County Bar Association, American Bar Foundation, American College of Trial Lawyers, American Judicature Society, and the American Inns of Court. He served as the president of Ellsworth Inn from 1990 to 92 and president of Koskoff Inn 1978-99. Judge Dorsey also belonged to the Connecticut Defense Lawyers Association and served as its president in 1973. He was also a member of the Connecticut Catholic Lawyers Guide. He was a recipient of the Connecticut Trial Lawyers Association's Judiciary Award, the Connecticut Bar Association Judiciary Award and the Quinnipiac Law School Baldwin Award for Public Service. Judge Dorsey also received the Quinnipiac Council Boy Scouts of American Leadership Award in 1992, and served on on the organization's board. He had previously served as president of the Big Brothers Association of Hamden, and served the town of Hamden on the Representative Town Meeting, Legislative Council and Police Commission and as town attorney. He was a Little League Baseball coach in the town of Hamden. A service for Judge Dorsey will be celebrated at 10 a.m. Wednesday, Jan. 25, at St. Rita's Church in Hamden. There will be no calling hours. Burial services will be private. In lieu of flowers, contributions in his name may be made to The Connecticut Hospice at 100 Double Beach Road, Branford, CT 06405.