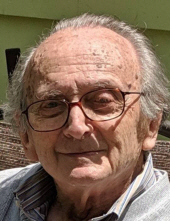 Peter Lengyel, 90, of Woodbridge, died peacefully on April 21, 2020 in his home with his family nearby. He was born on May 24, 1929 in Budapest, Hungary, to the late Mihaly and Alice (Koszeg) Lengyel. Though he and his parents survived the Holocaust, they lost many relatives. Peter was greatly influenced by his grandfather, Maximilian Koszeg, a physician, who advised young Peter to pursue a career in science rather than in medicine, since doctors knew too little. Peter and his future wife Suzanna Kadar left Hungary in 1956 after the failed Hungarian Uprising. They married in Vienna and then came to America as refugees, both 27 years old. They settled in New York City so Peter could pursue his PhD. at NYU with Severo Ochoa. As a graduate student, Peter worked on deciphering the genetic code.The family spent a year in Paris in 1963-64. Peter was at the Pasteur Institute with Jacques Monod. Starting in 1965, for over 40 years, Peter was a professor at Yale University in the Department of Molecular Biophysics and Biochemistry. He loved research. He spent many years studying protein synthesis, interferon, and the regulation and modulation of cell proliferation and differentiation. He loved music, art, nature, travel, and long walks with his wife, and he had a wonderful sense of humor. Peter is survived by his children Carole Lengyel (and her husband Satori Iwamoto) of East Greenwich, RI, and Michael Lengyel of New York, NY, and his grandchildren Alex, Nicholas, and Peter Iwamoto. He was predeceased by Suzanna in 2019. Thanks to Laurie Luce, Stephen, Lume, Diana, Matthew, and Joyce, who were Peter's caregivers in his final years. Due to the coronavirus pandemic, a memorial service is postponed. In lieu of flowers, contributions may be made in Peter's memory to the International Rescue Committee (www.rescue.org).