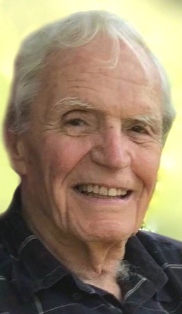 Peter Schultheiss died peacefully in his sleep in Hamden, Connecticut on February 23, 2021 at the age of 96. He was predeceased by his wife of fifty years, Ulla (Heimann) Schultheiss.
Peter was born in Munich, Germany in 1924, the son of Karl Schultheiss, an artist, and Alice (Trier) Schultheiss. In 1939, the family fled Nazi Germany for England; a year later, they arrived in the United States. Peter attended The Lawrenceville School in New Jersey and then Yale University, where he received a BS in electrical engineering. In 1945, Peter was drafted into the U.S. Army, serving as a radio operator for AMFOGE (Allied Mission for Overseeing the Greek Elections). Upon completing his military service, he returned to Yale for his PhD and soon thereafter began his research and teaching career.
He was a faculty member at Yale University, teaching in the Electrical Engineering and Mathematics departments for over 65 years. He trained dozens of PhD students, and was widely known for his research in the fields of electrical control systems and signal processing, with a focus on detection and estimation theory. He made significant contributions to the theory of source localization by an array of sensors and advanced its application in underwater acoustics. Even after officially retiring in his seventies, he continued to teach classes until he was 91. He loved teaching and was proud that he never missed a class, even putting on cross-country skis to travel the six miles to Yale during the blizzard of ‘78.
A resident of Hamden since the 1950s, Peter enjoyed opera, chamber music, and visiting art museums, as well as travelling to Europe to see family. He especially loved spending summers in Vermont with his children and grandchildren. Peter was an avid gardener, reader, and hiker and up to the last day of his life, walked several miles a day. His quiet, loving presence will be missed by all who knew him. He is survived by his four children, Thomas of Haifa, Israel; Katrin (Eric Arnesen) of Bethesda, Maryland; Andrew (Katherine Schwartz) of Boulder, Colorado; Susan (Bob Gribbon) of Hamden, Connecticut; and seven grandchildren: Rachel, Samuel, William, James, Mia, Daniel, and Gavriela.
There will be a private celebration of Peter’s life at a later date. Donations can be made in his honor to the Weston Playhouse or the Green Mountain Club. BEECHER & BENNETT FUNERAL HOME, 2300 Whitney Ave., Hamden is in care of arrangements.