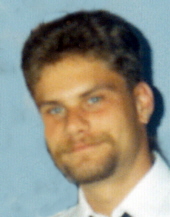 Peter Patrick Boughton, 43, of Hamden, passed away on December 19, 2012 after a short illness. He was born in New Haven on December 4, 1969 to Dennis Boughton of Hamden and Joan Silk Petraccione of Bethel, VT. Besides his parents, Peter is survived by his daughter, Stephanie Boughton of Hamden; siblings, Jackie Marvel and Joan Turner both of Hamden, Dennis Boughton of New Haven, and Jill Boughton of Hamden; step-father, Michael Petraccione of Bethel, VT. Peter grew up in New Haven and most recently lived in Hamden. Friends are invited to visit with his family on the evening of Friday, December 28th from 5:00 to 8:00p.m. at BEECHER & BENNETT, 2300 Whitney Ave, Hamden. Burial will be private.