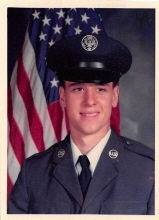 Philip E. Cantore, 54, of Hamden, passed away on February 14, 2015 surrounded by his family. Born in Brooklyn, NY on December 20, 1960 to Philip Cantore and his dearest mother, the late Janet Johnson. Philip is survived by his daughters, Sophia & Grace Cantore; former wife, Melissa Cantore; step- father, Robert Johnson; sisters, Alicia Cantore & Elizabeth Rodman, along with his nieces, nephews, & friends. He was a proud U.S. Air Force Veteran and served on the Milford Police Dept. for 22 years. He loved nothing more than his Pittsburg Steelers, the NY Yankees, and his family. His Memorial Service will be held on Saturday, February 21st at 11:00AM in Trinity Lutheran Church, 292 Orange St, New Haven. BEECHER & BENNETT, 2300 Whitney Ave., Hamden in care of arrangements.