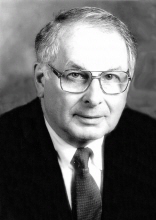 Phillip Eugene Lint of Ashlar Village in Wallingford, formerly of Westport, passed away on January 25, 2018. Husband of Donna Brown Lint. Born in Sturgis, MI on April 3, 1929, he was the son of the late Charles and Genevieve Trexler Lint. He received his Bachelor’s Degree from Michigan State University in 1951. He then served in the U.S. Army as a First Lieutenant during the Korean War. Phillip spent his business career as a partner in the Audit Division of Price Waterhouse Coopers. After his retirement, he served on the Board of Directors of Allegheny Energy Inc., listed on the New York Stock Exchange, as well as 3030 Park, a retirement community in Bridgeport, CT. He was a member of the Green's Farms Congregational Church of Westport, the “Y’s Men” of the Westport YMCA and the Connecticut Seniors Golf Association. He was an Adjunct Professor at the Graduate School of Business of New York University. Phil was a member of Brooklawn Country Club of Fairfield, where he served as President, The Sky Club and the City Mid Day Club in New York City, and the Algonquin Club in Bridgeport, CT. During his time in Wallingford, he was a member of Wallingford First Congregational Church. Phil was President of the Ashlar Village Association, member of the Ashlar Village Inc. Board, and chaired the finance committee. In addition to his wife, he is survived by his son, Eric Lint of Kennebunkport, ME, a daughter, Jean Lint Mason and her husband, Edward C. Mason of Fairfield, CT, and five grandchildren, Sarah Mason of New York City, Teddy Mason of Austin, TX, Emily Mason of Stamford, CT, Bradford Lint of Fairfield, CT, and Madison Lint of Fairfield, CT. A brother, Jacque Lint, predeceased him. A memorial service will he held on Friday, March 2, 2018 at 2pm at the Hartog Center at Ashlar Village in Wallingford, CT Arrangements are with Beecher and Bennett, 2300 Whitney Ave, Hamden. It is suggested that memorial contributions may be sent to; the Phillip E. and Donna M. Lint Fund at the Fairfield County Community Foundation, 40 Richards Avenue, Norwalk, CT 06854.