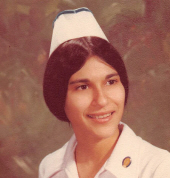 Philomena T. Ensero Camputaro, age 62, passed away on August 10, 2015 at the Mary Wade Home after suffering from early onset Alzheimer's Disease for the past 10 years. She was born in Waterbury, CT on August 28, 1952, daughter of the late Thomas Ensero and Grace Denzio Ensero. Philomena was predeceased by her husband, Nicholas Camputaro, Jr, her daughter, Nicole Ann Camputaro, her sister, Barbara Sayers, and her father-in-law, Nicholas Camputaro. She is survived by her son, Christopher Thomas Camputaro, her nieces, Crystal Mayers and Renee Daggett and their children, Devin, Brandon, Kyle, Jalen and Angelina, her mother-in-law, Stella Camputaro, her sisters-in-law, Debra Camputaro and Ann Chieppo and her husband, Chip. Philomena was a devoted daughter, loving wife and mother, wonderful sister-in-law and aunt, and a trusted and loyal friend. Philomena was a graduate of Southern Connecticut State University where she earned her RN degree. She was a kind and compassionate nurse having worked on 5-7 at Yale New Haven Hospital for over 20 years. She put her career on hold when her son Chris was born to stay with him and eventually started a home daycare and became a second mom to many of the children in the neighborhood. Philomena also taught at New England Technical Institute where she imparted her breadth of knowledge and nursing skills to future LPN's and CNA's. She was an inspirational teacher and role model in both classroom and clinical settings. Some of her former students became her caregivers after she became ill. The Camputaro family would like to thank the staff at Partnerships Adult Day Care, Atria Larson Place , the Mary Wade Home and Franciscan Hospice for their steadfast dedication to keeping Philomena comfortable. Her family would also like to thank Ron Bowen, Sharon Albone and Sister Catherine Mary for their longstanding guidance and encouragement, and the Clelian/St. Stephen's monthly caregivers support group for sharing their experience and wisdom throughout Philomena's struggles. We take comfort in knowing that Philomena is finally at peace in the arms of our Lord and in the joyful presence of Nicky and Nicole. Friends may visit with her family at BEECHER & BENNETT FUNERAL HOME, 2300 Whitney Avenue, Hamden, on Saturday, August 22nd from 8:30 AM to 10:30 AM. Burial will be private. In lieu of flowers, donations may be made to the Nicole Ann Camputaro Memorial Scholarship Fund, c/o the Beecher & Bennett Funeral Home, 2300 Whitney Avenue, Hamden CT 06518. ROMANS 8:28 And we know that in all things God works for the good of those who love him, who have been called according to his purpose.