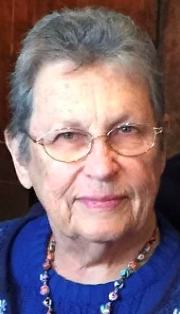 Phyllis (Gamache) Kallert, 85, of Hamden passed away peacefully on March 9, 2022. She was the loving wife of Fred Kallert for 61 years. Phyllis was born in Hamden on March 30, 1936, daughter of the late Paul and Margaret (Meyer) Gamache.
Phyllis is survived by her children; Susan Kerrigan and her husband John Kerrigan M.D., (Bainbridge Island, WA) Kathryn Caliendo (Hamden), and Paul Kallert and his wife Deborah Scarpellino-Kallert (Branford). Beloved grandmother of Haley, Katrina, and Faith Kerrigan, Carly and Doug Caliendo, and Ryan and Olivia Kallert. Sister of Robert Gamache, and sister-in-law of Jan Gamache. She was predeceased by her son-in-law Lou Caliendo, brother Paul Gamache, and sister-in-law Carol Gamache.
Phyllis graduated one of the top of her class from East Haven High School in 1954. She went on to receive her nursing diploma from Lankenau Hospital School of Nursing, Philadelphia, PA. She played basketball in high school and college but her greatest passion was swimming in the ocean. Growing up in Momauguin and living close to the sea, Phyllis spent much of her childhood and later, with her young children at the East Haven town beach. She loved adventure and travel. She enjoyed her train rides to and from nursing school as well as numerous road trips with her husband and family. Many excursions involved tent camping all along the east coast, with one of her favorites being Camp Calumet with her church family. Phyllis loved spending time and playing board games with her grandchildren. She traveled many miles with Fred to their sporting events whether it was soccer, swimming, rowing, baseball, hockey, or equestrian.
Phyllis was a lifelong Lutheran and active member of Trinity Lutheran Church, New Haven (where she met her husband), and later a member of Christ Lutheran Church, Hamden. She volunteered well into her later years for alter guild, lady’s guild, and church social functions.
Phyllis had a deep love for learning, no manual or brochure went unread. She had an unsurpassed interest in all things medical. She was devoted to her nursing career, which she began at the West Haven VA. After taking time off to raise her family she continued practicing at St. Raphael’s Hospital, Whitney Manor, and eventually retiring after 25 years as a school nurse at Quinnipiac University.
A celebration of Phyllis’ life and resurrection will be at Christ the Good Shepherd on Monday, March 14th at 10 a.m. with interment in Evergreen Cemetery, New Haven immediately following the service. In lieu of flowers, donations in Phyllis’ memory may be made to Christ the Good Shepherd Lutheran Church, 600 Shepard Ave., Hamden, CT 06514. Beecher & Bennett Funeral Home, Hamden is assisting with the arrangements.