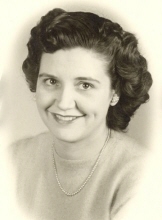 MERIDEN - Phyllis Mary Lyons Rotert died the morning of March 9th at Connecticut Baptist Home in Meriden, after years of homecare by her devoted sister Bernice Lyons. Phyllis L. Rotert was a member of Center Congregational Church of Meriden, where as a young woman she taught Sunday School and where she was later married. She was also an Officer of Eastern Star #8. Phyllis' desired nursing career was curtailed by rheumatic fever, though she later worked in the medical offices of Dr. Robert Healy and Dr. Lirot. After marrying, she moved to California where she bore a son. Returning to Meriden, Phyllis worked for a time at New Departure, Div. of GM, before retiring as Mortgage and Loan Supervisor from Jefferson Federal Savings, after a 30-year career. Phyllis Rotert was preceded in death by her beloved mother, Lena Spencer Lyons and sister Marion England, both of Meriden, and a brother, Kenneth Lyons of Killingworth. She is survived by her son, Richard Rotert of Nogal, New Mexico; sisters, Bernice Lyons and Doris Miller, both of Meriden; a brother, William Lyons of Meriden and Wallingford; and numerous nieces and nephews. Visiting time with family and friends will be Friday, March 14, from 11 a.m. to 1 p.m. at the Beecher & Bennett Flatow Funeral Home, 48 Cook Ave., Meriden. A memorial service will follow immediately at 1 p.m. The Rev. Dr. John W. Clarke will officiate. Burial will be at the discretion of the family.